​​​Tungsten and titanium compounds join forces to turn a common alkane into other hydrocarbons. ​ 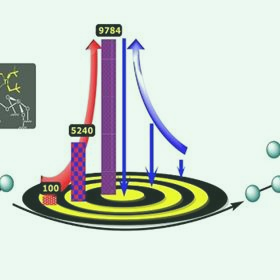 A new catalyst that contains tungsten and titanium could help the petrochemical industry to convert propane to heavier hydrocarbon fuels. The red arrow represents the turnover number and the blue arrow the proximity of the organometallic complexes.

A highly efficient catalyst that converts propane gas into heavier hydrocarbons has been developed by KAUST researchers1. It significantly speeds up a chemical reaction known as alkane metathesis, which could be used to produce liquid fuels.

The catalyst works by rearranging propane, which contains three carbon atoms, into other molecules, such as butane (containing four carbons), pentane (with five carbons) and ethane (with two carbons). “Our aim is to convert lower molecular weight alkanes to valuable diesel-range alkanes,” said Manoja Samantaray from the KAUST Catalysis Center.

At the heart of the catalyst are compounds of two metals, titanium and tungsten, which are anchored to a silica surface via oxygen atoms on the particles' surface. The strategy used was catalysis by design. Previous studies showed that monometallic catalysts were engaged in two functions: alkane to olefin and then olefin metathesis. Titanium was chosen because of its ability to activate the C-H bond of paraffins to transform them to olefins, and tungsten was chosen for its high activity for olefin metathesis.

To create the catalyst, the team heated silica to remove as much water as possible and then added hexamethyl tungsten and tetraneopentyl titanium, forming a light-yellow powder. The researchers studied the catalyst using nuclear magnetic resonance (NMR) spectroscopy to show that the tungsten and titanium atoms lie extremely close together on the silica surfaces, perhaps as close as ≈0.5 nanometres.

The researchers, led by the Director of the center Jean-Marie Basset working closely with Samantaray, then tested the catalyst by heating it to 150°C with propane for three days. After optimizing the reaction conditions— for example, by allowing the propane to flow continuously over the catalyst—they found that the main products of the reaction were ethane and butane and that each pair of tungsten and titanium atoms could catalyze an average of 10,000 cycles before losing their activity. This “turnover number” is the highest ever reported for a propane metathesis reaction.

This success of catalysis by design, the researchers propose, is due to an expected cooperative effect between the two metals. First, a titanium atom removes hydrogen atoms from propane to form propene and then a neighboring tungsten atom breaks open propene at its carbon-carbon double bond, creating fragments that can recombine into other hydrocarbons. The researchers also found that catalyst powders containing only tungsten or titanium performed very poorly; even when these two powders were physically mixed together, their performance did not match the cooperative catalyst.

The team hopes to design an even better catalyst with a higher turnover number, and a longer lifetime. “We believe that in the near future, industry can adopt our approach for producing diesel-range alkanes and more generally of catalysis by design,” said Samantaray.