Flicking the switch on a molecular gate

Flicking the switch on a molecular gate 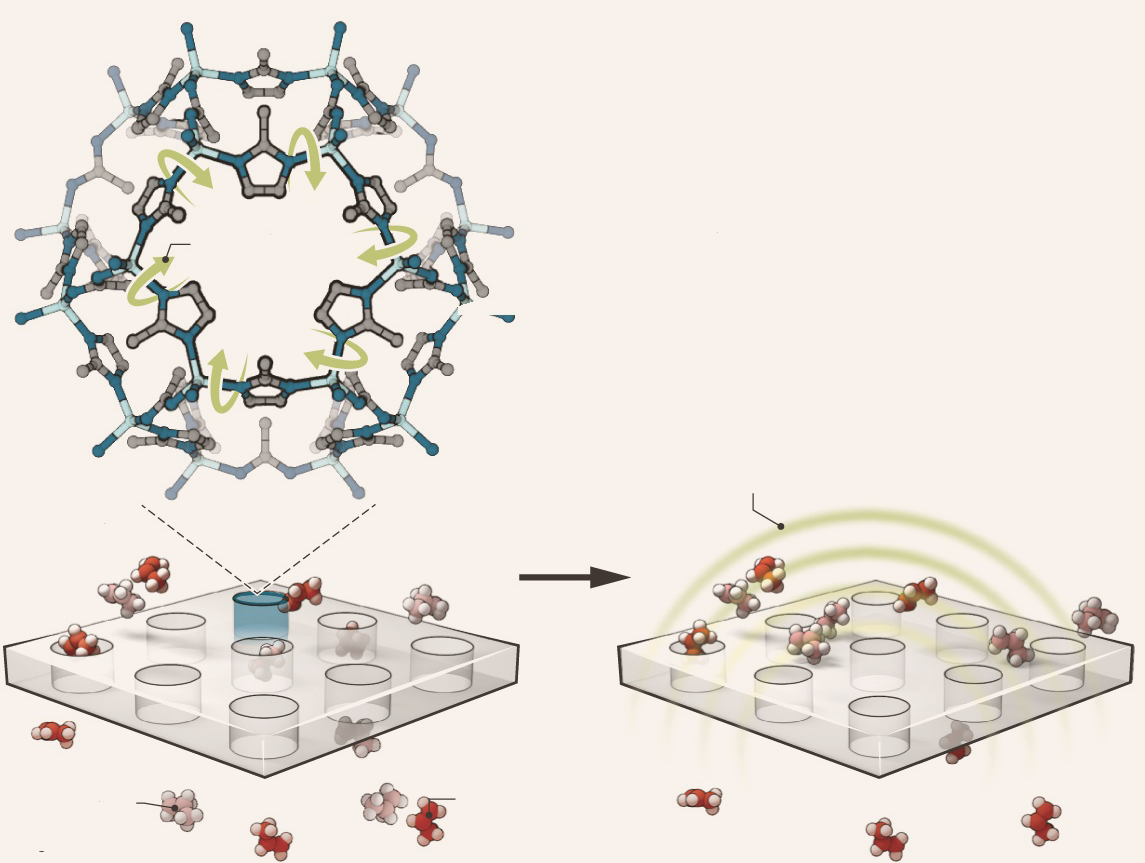 MOFs are formed from a combination of organic ligands and metal nodes or clusters. In some of these materials, host-guest interactions respond to physical and chemical stimuli, leading to “breathing” (reversible opening and closing of pores) or swelling. In other cases, linker rotation or net sliding, which are not necessarily accompanied by crystallographic phase transitions, also provide structural flexibility (3). Because of such linker and structural dynamics, sharp molecular sieving—the separation of two molecules with similar kinetic diameters based on size exclusion—has only been demonstrated in a few cases (4, 5).

Zeolitic imidazolate frameworks (ZIFs), a subclass of MOFs containing imidazolate building units, are an example of soft MOF crystals in which linker rotation plays an important role. Most ZIFs can accommodate bigger molecules in their pores than one would predict based on structural data. For example, ZIF-7 has a crystallographic window size of ∼0.3 nm, yet can accommodate hydrocarbons with kinetic diameters above 0.5 nm. Similarly, ZIF-8, the material studied by Knebel et al., has a crystallographic window size of 0.34 nm but allows diffusion of molecules such as n-hexane, benzene, and 1,3,5-trimethylbenzene (>0.7 nm in kinetic diameter) (6, 7). Many studies have investigated the mechanisms behind MOF flexibility, but efforts to control this property with noninvasive stimuli have been unsuccessful.

Knebel et al. now show that structure polarization caused by an applied external electric field is a nondestructive and reversible way to control gas transport through polycrystalline ZIF-8 membranes. The authors report that exposure of ZIF-8 to an external electric field of 500 V/mm causes lattice polarization, followed by a crystal structure transition from cubic to monoclinic and triclinic polymorphs. The crystallographic pore aperture in the cubic structure is smaller (0.34 nm) than in the polymorphs (0.36 nm). However, restricted linker mobility in the latter leads to lower fluxes through the membrane and to a much sharper size exclusion in the separation of propene from propane (see the figure); this is the case even when only ∼30% of the crystals in the ZIF-8 membrane undergo this phase transition under the applied electric field.

Additional experiments performed on membranes formed by another MOF, the nonflexible HKUST-1 (8), demonstrate that electric fields only influence MOFs that display soft mode phase changes. However, many MOFs do behave as soft crystals (9), and the library of materials that could be electrically actuated is huge. For instance, several polymorphs are known for the abovementioned ZIF-7, with a strong dipolar linker (10). Besides, the reported findings may only be the beginning. Knebel et al.suggest that if a sufficiently strong electric field is applied, complete linker alignment could be achieved. Should this be the case, we would be one step closer to making molecular gates that are straightforward to actuate.

Knebel et al.'s findings may have implications far beyond membrane separation. Although previously suggested in a theoretical study (11, 12), the experimental proof that the crystal structure of MOFs can be manipulated with electric fields opens the door to many other applications. The work may lead to very interesting new applications, including adsorptive processes on dynamic beds where pore size is controlled as a function of gas phase composition, catalysts where selectivity could be tuned for certain substrates by changing the coordination environment of the active site, and even electrically actuated artificial organs and tissues.